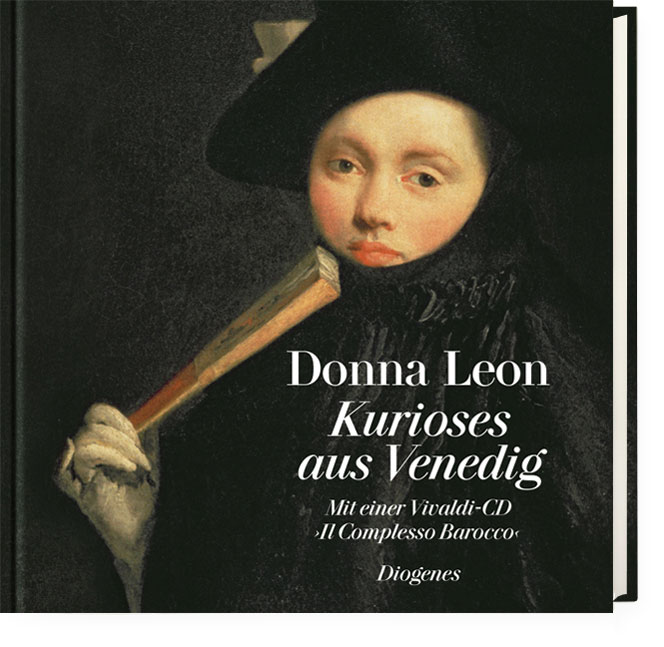 With a Vivaldi-CD by ›Il Complesso Barocco‹ and numerous illustrations.
Published by Diogenes as Kurioses aus Venedig
Original Title: Kurioses aus Venedig
In ›Venetian Curiosities‹ Donna Leon tells amazing tales from the Venetian past, whilst ›Il Complesso Barocco‹ offers virtuosities by Antonio Vivaldi on the CD which accompanies this book. Venice is unique. And so is its history. But what is most remarkable are the stories that the inhabitants tell each other about what happened in the past. Donna Leon has picked up the most intriguing customs and events recounting anecdotes that might or might not be true, and thus the Serenissima is seen from an astonishing side. An elephant seeks refuge in the church of S. Antonin, courtesans are supposed to convert men to proper heterosexual behaviour, gamblers bet their palazzos, people are convicted though they prove to be innocent – Venice is full of curious and odd episodes. These stories are of as rich a diversity as the music of Antonio Vivaldi: The CD presents seven solo concerts: Violin, cello, oboe and bassoon, viola, violone and harpsichord, they all play their part. ›Il Complesso Barocco‹, founded in 1979 by Alan Curtis, is an international ensemble dedicated to Baroque music on original instruments. It has played a fundamental role in the modern revival of Baroque operas, especially those of Monteverdi, Vivaldi and Handel. ›Il Complesso Barocco‹ received the ›Antonio Vivaldi International Recording Prize‹ in 1997 as best production in the vocal section. For their Handel recordings they were awarded the ›Preis der deutschen Schallplattenkritik‹ in 2003 as well as, on several occasions, the international ›Handel Recording Prize‹.