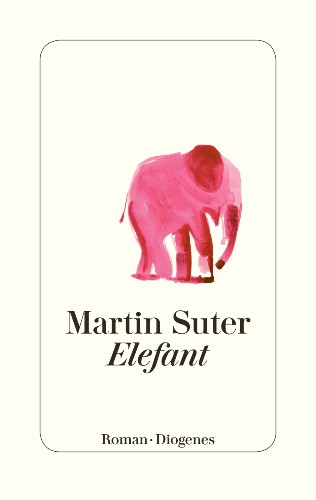 Just like last year, Diogenes is # 1 on the fiction publisher hardcover ranking of the Spiegel bestseller list for the year 2017.

Eight of our titles contributed to this feat, most prominently, Martin Suter's Elephant. The book about the handbag-sized pink pachyderm made it to # 10 of the 2017 fiction hardcover ranking.

Four more titles of which we handle world rights made it to the all-year fiction hardcover ranking: Donna Leon’s Earthly Remains was # 29, Benedict Wells’ On the End of Loneliness # 37 (particularly outstanding after being released in 2016), Ingrid Noll’s Tally-Ho # 57 and Klaus Cäsar Zehrer’s debut The Genius # 85

→ go to Book Share
Almost 40k copies sold of In the Middle of August by Luca Ventura
Up until the middle of December, we have sold almost 40’000 copies of Luca Ventura’s In the Middle o [More]
Joachim B. Schmidt's Kalmann endorsed by fellow authors, praised by the press
We are especially happy to hear the Icelandic author Hallgrímur Helgason (101 Reykjavík) praise Joac [More]
A Summer's Tale by Bas Kast on the Spiegel bestseller list for nine weeks
A Summer's Tale by Bas Kast made it to the Spiegel bestseller list upon publication and has stayed t [More]
Charles Lewinsky's Halfbeard on the Swiss bestseller list for 14 weeks
Charles Lewinsky's Halfbeard has remained on the Swiss top 20 bestseller list for 14 weeks until the [More]
Colours of Farewell by Bernhard Schlink to be available in 15 languages
Bernhard Schlink's Colours of Farewell has been on the Spiegel bestseller list for 23 weeks now, 15 [More]
Tomi Ungerer’s Non Stop praised by the press
We've had some excellent press of late for Non Stop upon the recent publication of the English editi [More]
One million copies of his books sold: Benedict Wells receives the ›Golden Diogenes Owl‹
It is a Diogenes tradition: Authors whose books sold more than one million Diogenes copies receive o [More]
Bernhard Schlink’s Olga to be published by HarperVia
We have sold US rights of Bernhard Schlink’s Olga to HarperVia, who are going to publish the book by [More]
Daniela Krien receives the Saxonian Prize for Literature
Daniela Krien will receive this year’s Saxonian Prize for Literature (Sächsischer Literaturpreis) fo [More]
#1 of the Spiegel bestseller list: Colours of Farewell by Bernhard Schlink
It's rare for a book of stories on the German-speaking market, but it happens in few select cases: B [More]
English rights of two Hunkeler novels sold to Bitter Lemon Press – and the latest about the series
Bitter Lemon Press snapped up English rights of Silver Pebbles and Hunkeler Messes Around, which are [More]
Daniela Krien’s works make their way in the world – and to the screen
Daniela Krien’s Love in Case of Emergency will be published as Love in Five Acts by MacLehose in Apr [More]
Sasha Filipenko’s Red Crosses soon to be available in 12 languages
We’ve sold Spanish world rights of Diogenes’ spring 2020 top title Red Crosses by Sasha Filipenko to [More]
Four rights sales of Patricia Highsmith’s works in the last two months
Patricia Highsmith is definitely keeping us busy. La Nave di Teseo has snapped up Italian rights of [More]
Martina Borger’s novel We’ll Catch up on It Later #30 on the Spiegel bestseller list
What a timely book title! We’ll Catch up on It Later, the book by Martina Borger, ranked #30 on the [More]
Croatian and Greek rights of Andrej Kurkow’s Grey Bees sold
Božičević and Kastaniotis snapped up Croatian and Greek rights to Andrej Kurkow’s latest book Grey B [More]
Spanish rights of Chris Kraus' Cold Blood sold to Salamandra
Salamandra has snapped up Spanish rights of Chris Kraus’ novel Cold Blood. The book is to be publish [More]
Doris Dörrie’s Living, Writing, Breathing on the Spiegel bestseller list for more than half a year
This calls for a celebration: Doris Dörrie’s Living, Writing, Breathing has been on the Spiegel best [More]
Daniela Krien’s Love in Five Acts to be published in 20 languages
Daniela Krien is keeping us busy. With Estonian rights sold to Varrak, we’re at 20 languages in tota [More]
Ingrid Noll’s With Love, Karl #10 on the Spiegel bestseller list
Ingrid Noll’s latest book With Love, Karl entered the Spiegel bestseller list at #10 upon publicatio [More]
Tatjana Hauptmann receives Golden Diogenes Owl and has an exhibition on the occasion of her 70th birthday
Tatjana Hauptmann, illustrator of picture books such as A Day in the Life of Petronella Pig or How t [More]