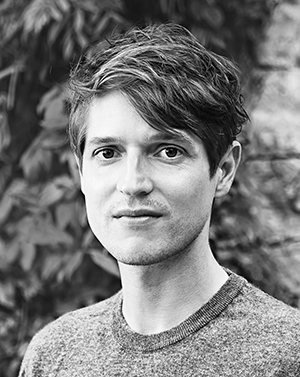 It is a Diogenes tradition: Authors whose books sold more than one million Diogenes copies receive our award, the ›Golden Diogenes Owl‹. The award ceremony took place yesterday afternoon in the little garden behind the publishing house.

Benedict Wells published his first book Beck’s Last Summer in 2008, when he was barely 24. Then followed Crank, Almost Ingenious and the one that brought him international renown once and for all: The End of Loneliness in 2016, on the Spiegel bestseller list for 80 weeks, awarded the European Union Prize for Literature. His works were published in 38 languages. His next book, The Truth about Lying was one of the very few short story collections that made it to the top ten of the Spiegel bestseller list.

At the age of only 36, Benedict Wells is one of the youngest authors to receive the ›Golden Diogenes Owl‹, here are a few other names in this category: Ian McEwan, John Irving, Donna Leon, Patrick Süskind, Bernhard Schlink, Barbara Vine, Tomi Ungerer.

We are looking forward to his latest book Hard Land, to be published in spring next year – you'll see it in our Foreign Rights List for spring 2021, to be released at the end of October.

→ go to Author
Andrey Kurkov is interviewed and publishes articles about the war in Ukraine all over the world
Andrey Kurkov was interviewed by major media outlets from all over the globe and wrote articles for [More]
Deep Water now released internationally
After quite some delay due to the pandemic, the long-awaited Deep Water with Ben Affleck and Ana de [More]
Sasha Filipenko's The Hunt on the top 20 of the Spiegel bestseller list, Dutch rights sold
Sasha Filipenko's latest book to be published in German, The Hunt, shot to #19 of the Spiegel bestse [More]
Joachim B. Schmidt talks about his new novel Tell
Enjoy the video here. [More]
Stefanie vor Schulte awarded the Mara Cassens Prize 2021 for Boy with a Black Rooster
We are proud and happy to announce that Stefanie vor Schulte is awarded the ›Mara Cassens Prize‹ by [More]
The Fire by Daniela Krien to be published in 8 languages
With French, Croatian and Serbian rights just sold to Albin Michel, Fraktura and Booka, The Fire is [More]
Patricia Highsmith's Her Diaries and Notebooks causes a press buzz
Patricia Highsmith continues to cause a stir in the international press with Her Diaries and Noteboo [More]
Bernhard Schlink's The Granddaughter #3 on the Spiegel bestseller list, praised by the press
Bernhard Schlink's The Granddaughter has shot to #3 on the Spiegel bestseller list. We have just sol [More]
Sasha Filipenko’s Red Crosses praised by English language press, soon to be available in 14 languages
The English edition of Sasha Filipenko's Red Crosses by Europa Editions (New York) has been very war [More]
Tomi Ungerer's Flix to be an animated TV series
The new animated TV series Flix will bring to life the children’s book by Tomi Ungerer of the same n [More]
Now published, pre-empted and shortlisted: our debut of this autumn Boy with a Black Rooster by Stefanie vor Schulte
Eleven-year-old Martin has nothing but the shirt on his back, and a black rooster which is both a pr [More]
Love in Case of Emergency by Daniela Krien praised by English-speaking media, to be published in 26 languages
British and Irish press are raving about the MacLehose edition of Love in Case of Emergency: »Highly [More]
French rights for Kalmann by Joachim B. Schmidt sold to Gallimard Noir
We have just sold French rights for Joachim B. Schmidt’s Kalmann to Gallimard’s noir series in an au [More]
Transient Desires, #30 in the Brunetti series, ranked #2 on the Spiegel bestseller list
On 26 May, Transient Desires appeared on the bookshelves and is currently on #2 of the Spiegel bests [More]
Noir sur Blanc wins six-way auction for French rights of The Ex-Son by Sasha Filipenko, Edizioni E/O buys Italian rights
Our six-way auction for French rights of Sasha Filipenko’s The Ex-Son has ended after three rounds a [More]
Benedict Wells' Hard Land to be published in 16 languages, Dutch bestseller
After launching Benedict Wells' Hard Land, the book shot straight to #1 of the Spiegel bestseller li [More]
Almost 40k copies sold of In the Middle of August by Luca Ventura
Up until the middle of December, we have sold almost 40’000 copies of Luca Ventura’s In the Middle o [More]
A Summer's Tale by Bas Kast on the Spiegel bestseller list for nine weeks
A Summer's Tale by Bas Kast made it to the Spiegel bestseller list upon publication and has stayed t [More]
Charles Lewinsky's Halfbeard on the Swiss bestseller list for 14 weeks
Charles Lewinsky's Halfbeard has remained on the Swiss top 20 bestseller list for 14 weeks until the [More]
Colours of Farewell by Bernhard Schlink to be available in 18 languages
Bernhard Schlink's Colours of Farewell has been on the Spiegel bestseller list for 23 weeks now, 15 [More]
Tomi Ungerer’s Non Stop praised by the press
We've had some excellent press of late for Non Stop upon the recent publication of the English editi [More]