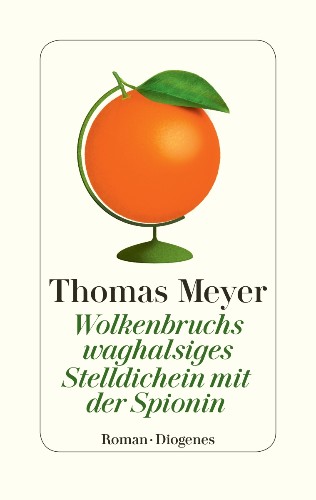 Praised for its humour: Thomas Meyer’s Wolkenbruch’s Reckless Rendezvous with the Seductive Spy

Thomas Meyer’s novel Wolkenbruch’s Reckless Rendezvous with the Seductive Spy, the second part in the Wolkenbruch series, made it to #1 of the Swiss bestseller list upon publication. Italian rights have been sold to Keller Editore.

The first instalment of the series, Wolkenbruch’s Weird and Wonderful Journey into the Arms of a Shiksa, was originally published in 2012 and has sold more than 150’000 copies. The film adaptation of the book became the most successful Swiss film of 2018 and is Switzerland’s nomination for the Academy Awards.

Here are a few enthusiastic press quotes for Wolkenbruch’s Reckless Rendezvous with the Seductive Spy:

»The bestseller sequel is a bold step away from part one: instead of counting on Swiss local colour and romcom-style charm, Meyer goes for fast-paced action.«
Philippe Zweifel / Tages-Anzeiger, Zurich

»By taking conspiracy theories to the absurd, Meyer makes it clear how mendacious they are – so far-fetched that the only possible response is laughter. [...] A pleasure to read.«
Martina Läubli / NZZ am Sonntag, Zurich

»The world as a monstrous grotesque, the insanity that has long since become part of our present-day lives flashing up in lurid colours.«
Felix Münger / srf.ch

»And so Meyer reaches for the only weapon remaining to him against stupidity and ignorance: the razor-sharp sword of black humour.«
Claudia Senn / Annabelle, Zurich

→ go to Book → go to Author Share
Rights quartet for Daniela Krien's The Fire before publication
We have just sold English UK rights of Daniela Krien’s latest novel The Fire to MacLehose Press, Ita [More]
Love in Case of Emergency by Daniela Krien praised by English-speaking media, to be published in 25 languages
British and Irish press are raving about the MacLehose edition of Love in Case of Emergency: »Highly [More]
Boy with a Black Rooster by Stefanie vor Schulte nominated for ›Klaus-Michael Kühne Prize‹
Stefanie vor Schulte's debut novel Boy with a Black Rooster is one of eight novels shortlisted for t [More]
French rights for Kalmann by Joachim B. Schmidt sold to Gallimard Noir
We have just sold French rights for Joachim B. Schmidt’s Kalmann to Gallimard’s noir series in an au [More]
Transient Desires, #30 in the Brunetti series, ranked #2 on the Spiegel bestseller list
On 26 May, Transient Desires appeared on the bookshelves and is currently on #2 of the Spiegel bests [More]
Noir sur Blanc wins six-way auction for French rights of The Ex-Son by Sasha Filipenko, Edizioni E/O buys Italian rights
Our six-way auction for French rights of Sasha Filipenko’s The Ex-Son has ended after three rounds a [More]
Benedict Wells' Hard Land to be published in eleven languages
After launching Benedict Wells' Hard Land, the book shot straight to #1 of the Spiegel bestseller li [More]
Almost 40k copies sold of In the Middle of August by Luca Ventura
Up until the middle of December, we have sold almost 40’000 copies of Luca Ventura’s In the Middle o [More]
A Summer's Tale by Bas Kast on the Spiegel bestseller list for nine weeks
A Summer's Tale by Bas Kast made it to the Spiegel bestseller list upon publication and has stayed t [More]
Charles Lewinsky's Halfbeard on the Swiss bestseller list for 14 weeks
Charles Lewinsky's Halfbeard has remained on the Swiss top 20 bestseller list for 14 weeks until the [More]
Colours of Farewell by Bernhard Schlink to be available in 15 languages
Bernhard Schlink's Colours of Farewell has been on the Spiegel bestseller list for 23 weeks now, 15 [More]
Tomi Ungerer’s Non Stop praised by the press
We've had some excellent press of late for Non Stop upon the recent publication of the English editi [More]
One million copies of his books sold: Benedict Wells receives the ›Golden Diogenes Owl‹
It is a Diogenes tradition: Authors whose books sold more than one million Diogenes copies receive o [More]
Bernhard Schlink’s Olga to be published by HarperVia
We have sold US rights of Bernhard Schlink’s Olga to HarperVia, who are going to publish the book by [More]
Daniela Krien receives the Saxonian Prize for Literature
Daniela Krien will receive this year’s Saxonian Prize for Literature (Sächsischer Literaturpreis) fo [More]
#1 of the Spiegel bestseller list: Colours of Farewell by Bernhard Schlink
It's rare for a book of stories on the German-speaking market, but it happens in few select cases: B [More]
English rights of two Hunkeler novels sold to Bitter Lemon Press – and the latest about the series
Bitter Lemon Press snapped up English rights of Silver Pebbles and Hunkeler Messes Around, which are [More]
Daniela Krien’s works make their way in the world – and to the screen
Daniela Krien’s Love in Case of Emergency will be published as Love in Five Acts by MacLehose in Apr [More]
Sasha Filipenko’s Red Crosses soon to be available in 12 languages
We’ve sold Spanish world rights of Diogenes’ spring 2020 top title Red Crosses by Sasha Filipenko to [More]
Four rights sales of Patricia Highsmith’s works in the last two months
Patricia Highsmith is definitely keeping us busy. La Nave di Teseo has snapped up Italian rights of [More]
Martina Borger’s novel We’ll Catch up on It Later #30 on the Spiegel bestseller list
What a timely book title! We’ll Catch up on It Later, the book by Martina Borger, ranked #30 on the [More]